A Spoon Full of Listening 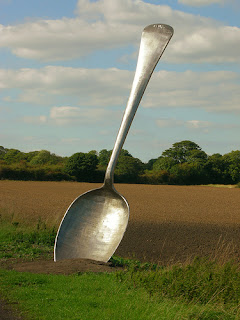 Sometimes hosting a formal Circle may not fit into the time schedule you have to facilitate conversation between individuals, or compliment the structure of events, or  fit into the agenda of a group gathering – and yet you still require a simple way for people to connect and be heard. Empowering meaningful conversation can be as simple as proposing a tangible item be a ‘talking piece’, to facilitate speaking one at a time: the person with the piece is the one doing the talking, while everyone else does the listening. It doesn’t take much instruction to get a group of people to pause and create space for such sharing to take place:

Last night, for example, was the Christmas social for a non-profit organization my partner and I volunteer with in our community, Food Matters Chilliwack, a non-profit group that advocates for safe and nutritious foods for all and supports local food growing initiatives. I decided to bring a giant wooden spoon (brought back from a trip to
I organized the chairs in one big circle, with a Christmas tree as part of the circumference, and with a giant opening for people to enter and sit down leisurely. I rolled out a string of Christmas lights and placed them under the chairs, to create a sense of Christmas decor as well as to accent the contained ‘circle area’. (Having the lights under the chairs also prevented people from stepping on them and breaking them).

People arrived, mingled and snacked on treats. Thirty minutes into the social, I called everyone to come and sit down in the chair 'circle' and suggested that the evening's events would start once everyone was seated.  When the last person leisurely came into the circle, I turned off the Christmas music, introduced myself, and held up the spoon saying that we were going to use it as a talking piece to help us take turns introducing ourselves and sharing what it was that had brought us to the Christmas social. I explained that the person with the piece was the one doing the talking while we all listened, and that to consider the amount of people present (~25) to know how much time to share (~3 minutes) before passing the stick to their left. I also mentioned that when the spoon came along to them, if they had nothing to say, they weren’t obliged to share, but at the very least please introduce themselves.  The final instruction I left with them, was actually ONE proposed question to empower self-reflection and meaningful sharing: "What is your vision for Food Matters in 2012, and how do you play a role in this vision?" It was my hope that people’s answers to this question would reveal enough information about each other, for everyone to know who to connect with around shared interests, in informal social conversations, following the introduction Circle.  A good question connects people and moves conversation.

One by one people shared while others listened. There was laughter as well as sounds of acknowledgement as people touched upon shared passions. The simple exercise of passing around a talking piece really helped to 'hear' and 'include' every person present that evening, especially those who were attending a Food Matters event for the very first time.

After the round was complete, and after the odd person added a thing or two announcements, to close off  the circle of sharing (although not revealing to the others this Circle principle), I thanked everyone for sharing, invited people to stay and mingle, and then turned the Christmas music back on.

Although I would not necessarily call the circle of sharing a “Circle” and although it would have been nice to have made the space more contained, I felt this space for speaking and listening was a success:
*Each person got an opportunity to speak and be listened to


*The ‘circle conversation’ connected people and moved the conversation forward into other pockets of discussion.
Did all of this arise from the simplicity of using a talking piece?
No comments:

Welcome to my online SHARING SPACE about Circle & bees. This BLOG includes personal reflections on, stories about, learning experiences of, and hopeful antidotes about utilizing the Circle process for community-building, empowering collaboration, & creating health and well-being for all - all beings!
* * *
I offer Circle & creative facilitation services for individuals and groups for a variety of purposes and present a unique understanding of and experience of Circle drawing from the wisdom of bees and beekeeping.
To learn more about this joyful work, please visit www.thebumblebeecircle.com